The Internet of Things – Objects become active participants in the digital world!

Change of perspective – robots do not destroy jobs, but secure our prosperity

A  current info graphic is overwritten with “The victims of the smartphone boom” and shows in detail which devices have suffered the most from the rise of the smartphone. The nomenclature reveals a lot about how we look at new technologies, especially in Germany, first of all something that destroys something that has been there and that we have grown fond of. Robotics destroys jobs, the Internet destroys printed newspapers and in the end the autonomous vehicle will destroy the joy of driving.

I find this attitude frightening, because it shows how quickly we overlook the possibilities that new technologies offer. In positive terms, one could also say that robotics does physical work and ensures that workers (who are still needed in automated manufacturing) stay healthy for a long time. The Internet provides barrier-free access to information, everywhere and in real time, and is not limited to the filtered opinions of individual newspaper editors, and the autonomous vehicle will lead to another drastic reduction in road deaths.

These examples show that perspective is what counts! Back, for example, the electronic devices mentioned have not even disappeared, they have rather been absorbed into the housing of a single device, the smartphone. They are therefore a bridging technology from the analogue world to the digital world, and therefore not the victim, but actually the enableer!

Let’s look back a few years. If someone had given you a modern smartphone in the 1980s and told you that you could use it to dispose of your SLR camera (with all its photo equipment), your recently purchased CD player, your large inventory of folding cards and your landline phone, you probably wouldn’t have been very enthusiastic. Thanks to individual products ranging from mobile phones and navigation devices to MP3 players, we have slowly approached digitization and gradually integrated these devices into our lives. The rudimentary functions – just remember the quality of the first digital pictures – were gradually improved and eventually found each other, because the smartphone contains exactly the functions that we as users need most often.

In addition to technical development, the individual devices also play an important role in cultural change; individual devices can be better integrated than an all-in-one solution that changes everything in one fell swoop. So you want to say to graphics that  you’re not victims, but heroes, the facilitators of the digital revolution.

The only victims behind this are companies that are certain with a product or a solution that they have won a market for decades and are no longer searching for new solutions and offers for their customers. In an AgilEconomy nothing is as constant as change and it is the responsibility of every company to face this change with ever new ideas and innovations. From his point of view, anyone who does not do this becomes a “victim”, even if one can only counter this by saying that this is probably self-inflicted.

And for all nostalgics, a look at the music industry is encouraging: The CD, whose “victim” once was the record, is dead, long live the record again, at least the sales figures in this segment have been rising steeply again for years. 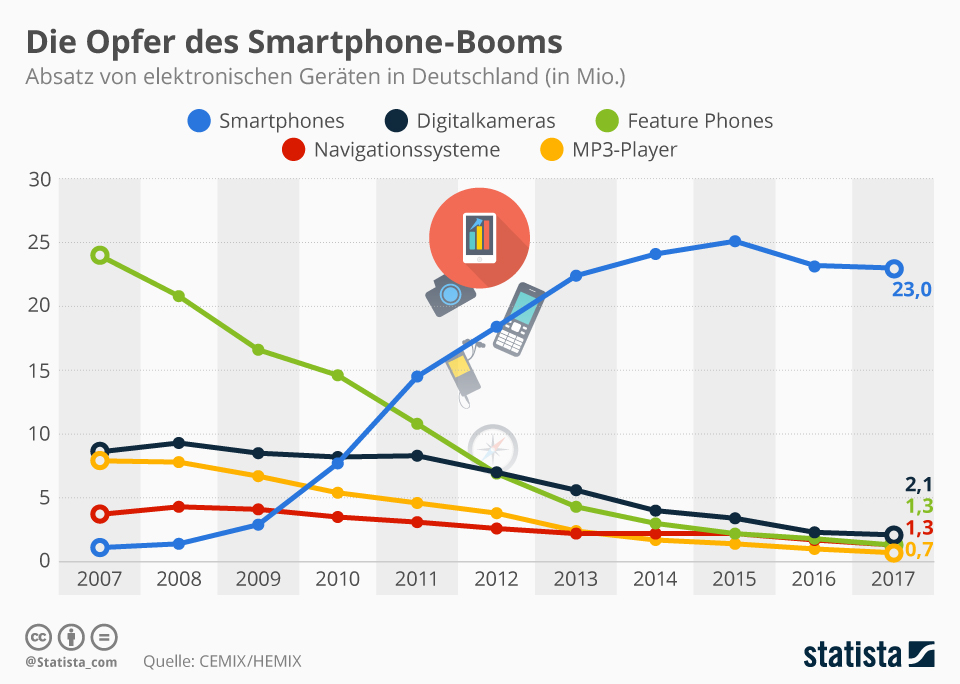